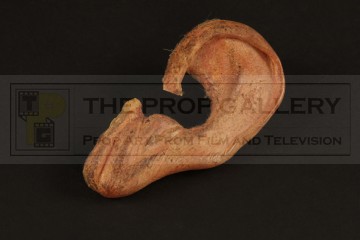 An original prop used in the production of Young Guns II, the 1990 western sequel directed by Geoff Murphy.

This prosthetic ear was custom made by the production and worn by Emilio Estevez as the elderly Billy the Kid in the scenes where he meets with Charles Phalen (Bradley Whitford) at the beginning of the movie. The prosthetic is constructed from rubber with a hand painted finish and features a grove to the underside where it could be placed on Estevez's ear.

The ear measures approximately 3" long and remains in very good production used condition with the rubber having hardened but not deteriorated.

A rare and displayable principal character artefact from this popular movie.