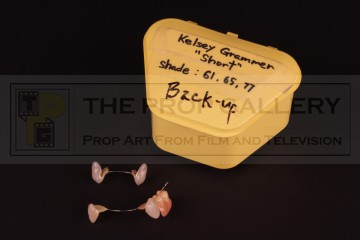 An prop used in the production of X-Men: The Last Stand, the 2006 superhero picture directed by Brett Ratner.

These dentures were one of a number of sets created by the production for use by Kelsey Grammer as Beast. The acrylic constructed dentures are designed to replace the actors upper teeth for filming and are presented in the original production used denture box. The box is hand inscribed with Grammer's name, shade numbers and 'BACK-UP' below indicating that these particular dentures were not one of the principal sets used during filming, given that three numbers are stated on the box with two of these corresponding to the numbers inscribed on the dentures present it seems likely that one piece is missing.