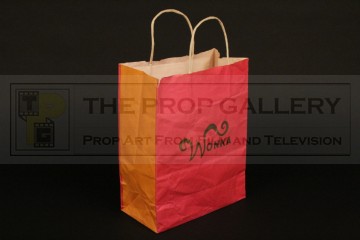 An original Wonka bag from the production of Charlie and the Chocolate Factory, the 2005 film adaptation of the famous Roald Dahl book starring Johnny Depp as Willy Wonka under the direction of Tim Burton.

This is an original Wonka branded bad created by the production for use in the flashback scenes at the beginning of the movie where Grandpa Joe (David Kelly) remembers the days of twenty years ago when Wonka operated out of a single store. The paper bag is constructed in the traditional manner in distinctive fluorescent pink and orange colours with an applied metallic style Wonka logo sticker to both sides, a bag of identical construction is clearly seen in the aforementioned flashback scene.

The bag stands approximately 12" high (16" to the top of the handles) and 9.5" wide, it remains in excellent condition with some light creasing where it has been folded after the production.

A vibrant and displayable artefact from this well received adaptation.