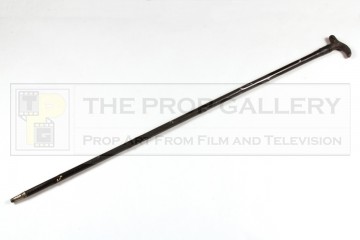 An original prop used in the production of Willy Wonka & the Chocolate Factory, the 1971 picture starring Gene Wilder under the direction of Mel Stuart.

This cane was obtained by construction manager Hendrik Wynands and used during rehearsals by Gene Wilder as Willy Wonka. The vintage German hallmarked cane is constructed from wood and features a metal grip to the top with scroll designs with a metal tip to the bottom, both this and the cane ultimately used on screen by Wilder were sourced by Wynands in Bavaria is close proximity to the studios where the picture was filmed. Obtained by The Prop Gallery directly from construction manager Hank Wynands the cane is referenced in Mel Stuarts book Pure Imagination as being given to Wynand's son following filming and is accompanied by an letter from him attesting to this.

An extremely rare principal character artefact from the production of this highly regarded classic.