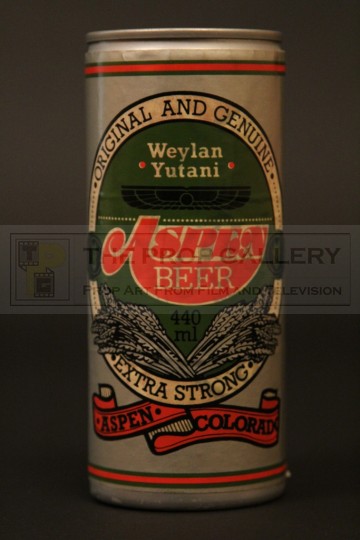 An original beer can used in the production of the 1979 science fiction classic Alien, directed by Ridley Scott with design from legendary Swiss surrealist H. R. Giger.

This Weylan Yutani Aspen beer can be seen consumed by various members of the Nostromo crew in the film. The can features the original Weylan Yutani logo and the winged emblem which was an idea conceived by Ron Cobb before being changed to Weyland Yutani for the James Cameron sequel Aliens. The prop consists of a period Aluminum beer can with added label that was custom made for the production. The contents of the can have long since gone and it retains the openings to the top which have been depressed.

The can stands 6" high and is in excellent production used condition with some minor staining to the top around the depressed holes, the label remains firmly attached and is in excellent vibrant condition. A rare example of an item which was largely disposed of after production wrapped and possibly the only surviving original example.

This represents a very displayable artefact from this science fiction classic and a rare element from the Alien universe to bear the original Weylan Yutani logo.