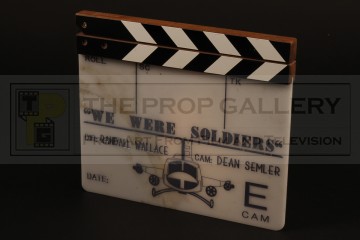 An original clapperboard used in the production of We Were Soldiers, the 2002 war picture starring Mel Gibson.

This production used clapperboard is constructed from semi translucent perspex with an affixed wooden clap stick and features the movie title 'WE WERE SOLDIERS'' in addition to a graphic of a helicopter etched in purple. The board also bears the names of director Randall Wallace and cinematographer Dean Semler with spaces to record the roll, scene, take and date and 'E CAM' for E camera to the bottom right corner.

The clapperboard measures approximately 11" x 9.5" and remains in good production used condition with some surface wear and a repair to the left side where it was once broken with glue and tape residue still present.

A displayable example of the iconic clapperboard from the production of this well received war picture.