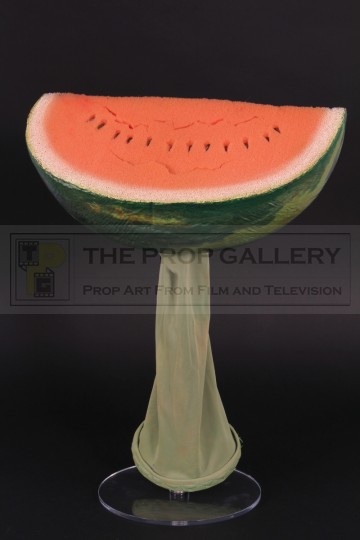 An original prop created the production of Muppets from Space, the 1999 science fiction comedy featuring characters created by Jim Henson.

This puppet was custom fabricated by the production as an example of The Singing Food, the anthropomorphic fruit and vegetable characters which first debuted in 1977. This watermelon puppet is constructed from carved furniture foam with a hand painted vinyl covering and features orange painted flesh with seeds of resin. To the interior of the puppet are finger holes used to operate the mouth with an elbow length glove of green material designed to cover the performers arm, this hand inscribed 'T-805' to the interior. Although created for the production a planned scene in the kitchen featuring various performing fruit did not make the final cut.

An extraordinarily rare and displayable example of an original Muppet puppet from this classic franchise.