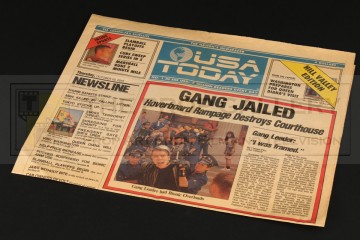 A USA Today newspaper such as this can be seen at the beginning of the movie as Doc Brown (Christopher Lloyd) and Marty McFly (Michael J. Fox) travel to the year 2015 in an attempt to prevent Marty's future children going to jail. Doc firstly shows Marty a newspaper with the headline 'YOUTH JAILED' which can be seen changing to 'GANG JAILED' following the iconic hoverboard chase sequence where Griff Tannen (Thomas F. Wilson) and his gang crash in to the courthouse thus preventing the events which send Marty Jr. to jail ever taking place.

The newspaper was custom made by the production and is printed on traditional stock, the Hill Valley edition features an image of Griff and his gang being arrested outside the courthouse following the hoverboard chase with the headline above 'GANG JAILED, HOVERBOARD RAMPAGE DESTROYS COURTHOUSE', to the right of this is an article about the incident which names the perpetrators. The newspaper is dated Thursday October 22, 2015 and features various other fictionalised reports such as the upcoming visit of Queen Diana and the Chicago Cubs winning the World Series, other futuristic references include the release of Jaws 17, a man killed by litter thrown from a flying car and a pitcher being suspended for using a bionic arm. To the verso the paper contains various weather reports which are unrelated to the production and is blank to the interior.

An instantly recognisable and highly displayable artefact from this classic science fiction trilogy which requires no introduction.