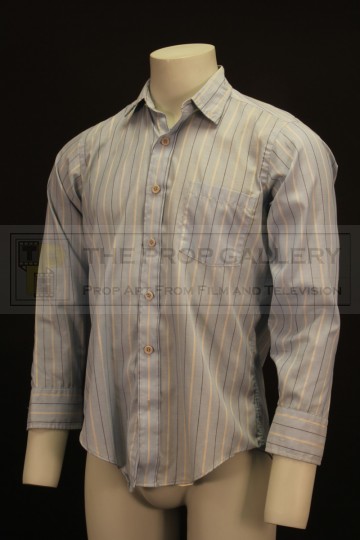 An original costume used in the production of Tom Horn, the 1980 western starring Steve McQueen under the direction of William Wiard.

This shirt was worn by Hollywood legend and pop culture icon Steve McQueen as Tom Horn as part of his signature wardrobe for the movie. The blue shirt features multicoloured stripes and distinct stitching to the collar with a pocket to the left breast, to the interior the shirt features the label of theatrical tailors American Costume which is type written 'TOM HORN' and 'S. MCQUEEN'.

Following the production this shirt was given by McQueen to his close personal friend Lee Majors, star of The Six Million Dollar Man and The Fall Guy, it was later kept by Playboy model Karen Velez who was married to Majors for six years and obtained by The Prop Gallery directly from her.

The shirt remains in excellent condition exhibiting only minor wear consistent with use during the production, very fine.

It was during the production of Tom Horn when McQueen fell ill and just eight months after its release he passed away at just fifty years of age, he remains one of the most iconic actors in the history of Hollywood and this represents a fine example of original wardrobe worn by The King of Cool himself.