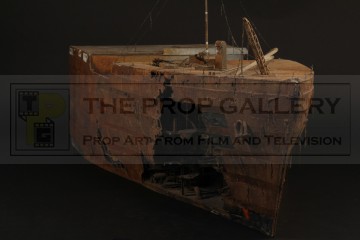 An original miniature used in the production of Ghostbusters II, the 1989 supernatural comedy sequel directed by Ivan Rietman.

This is the original miniature seen on screen as the Titanic arrives at New York and ghost passengers are seen walking away from the docked vessel. Constructed by noted visual effects specialists Industrial Light & Magic the miniature was built by a model making team led by John Goodson and Jeff Olsen using photographs of the recently discovered wreck for reference and is built largely from wood and urethane with the finish achieved by applying iron particles to the model and intentionally rusting them rather than simulating with paint, the rusticles achieved with intentionally rusted chain. The miniature features a large hole to the starboard side with interior detailing, two differing name plates, one believed to have been changed at the request of the director, various detail to the deck to include a crows nest, lights, plastic tubing visible to provide light to the portholes, railings and other dressing. Two thirds of the port side of the vessel have been left unfinished and open allowing the crew to light the model for filming, originally built in two parts this is the bow section with the stern section, which is almost entirely obscured on screen, presumably having been discarded following the production.

The miniature measures an impressive 60" long and 21" wide, it remains in very good screen used condition lacking some minor detailing in various areas most notably the railings, this not detracting from what is an outstanding and unique large scale Industrial Light & Magic built miniature.

A highly displayable artefact from this classic franchise and a wonderful representation of the most iconic ship in history.