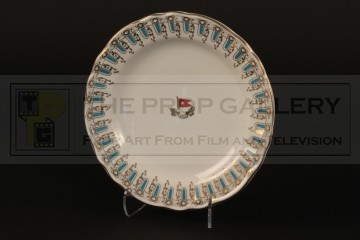 An original plate used in the production of Titanic, the 1997 disaster epic starring Leonardo DiCaprio and Kate Winslet under the direction of James Cameron.

Bread plates such as this were used in the first class restaurant scenes most notably where Jack (DiCaprio) dines with Rose (Winslet) after saving her life. The plate was created by the same company which made the originals used in the 1912 disaster specifically for the production and features the White Star Line logo to the centre with a pattern of green and gold to the edge.

The plate measures approximately 7.5" and remains in excellent production used condition. In addition to The Prop Gallery's COA this item is also accompanied by a 20th Century Fox studio COA.

A displayable artefact from this acclaimed Academy Award winning masterpiece which on its release became the highest grossing picture of all time.