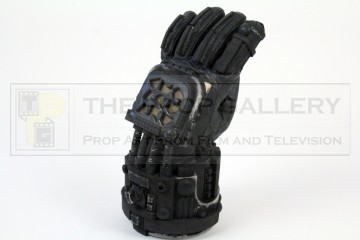 Time gauntlets such as this were used in the series V episode The Inquisitor written by Rob Grant and Doug Naylor. Utilised by the time travelling simulant Inquisitor and also by Lister and Kryten after the latter amputates the Inquisitor's hand and gauntlet.

The time gauntlet was constructed by Alan 'Rocky' Marshall and Andy Bowman of the BBC Visual Effects Department and was built as a one piece prop achieved by building the gauntlet on to a glove. Constructed from a leather glove with EMA plastic tubing forming the basis of the gauntlet and further dressed with foam, rubber and plastic parts with vacuum formed section to the back of the hand connected by tubing. The index finger tip of the glove has been removed, lined to the interior with plastic and fitted with a bulb guarded by gauze to achieve the light up feature seen on screen, this is operated by a button which can be depressed to the back of the hand, further to this is a switch to the top of the wrist area which would have controlled the light up panel on the back of the hand.

To achieve the light up features on screen all of the wiring inside the glove has been neatly arranged and wired into a connector at the wrist, this would have been connected to a power pack while in use for filming. As we have no access to such a power source the light up elements of the glove remain untested but the visible bulb to the fingertip would appear to be in one piece.

The prop measures an impressive 13" long with the diameter of the wrist area spanning approximately 6", it remains in excellent screen used condition with some minor detail loss in one area and minor paint loss.

An impressive display piece and central plot device from this cult television series.