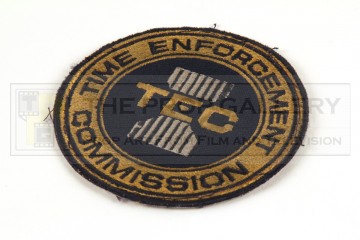 An original costume patch used in the production of Timecop, the 1994 science fiction action picture starring Jean-Claude Van Damme under the direction of Peter Hyams.

Time Enforcement Commission (TEC) patches such as this can be seen worn on various costumes throughout the production including that of Max Walker (Van Damme). The embroidered patch features the TEC logo to the centre and measures 3.5" in diameter, remains of thread are present following its removal from a production used costume after filming, in fine condition throughout.

An affordable and displayable artefact from this cult science fiction picture.