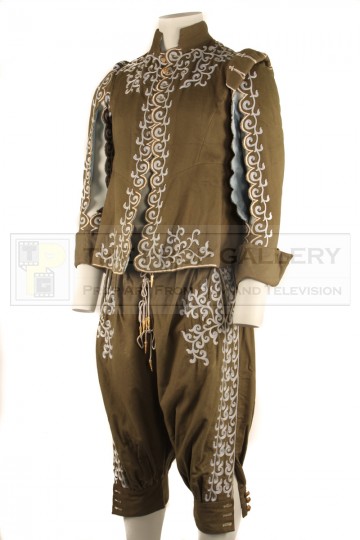 This costume was worn on screen by Simon Ward as the Duke of Buckingham in both The Three Musketeers and its sequel The Four Musketeers which were originally intended as one three hour epic but were ultimately split in to separate movies. The two piece costume was bespoke made for the production by industry leading costumiers Bermans and Nathans and consists of doublet and breeches of wool with filigree style embroidered detailing and decorative buttons, both elements of the costume are lined to the interior with the doublet featuring its original Bermans and Nathans label which remains blank, not uncommon for wardrobe from this production.

The costume remains in overall excellent production used condition with the doublet lacking a button and shoulder detail to one side and the breeches lacking three buttons to the waist. The material remains in remarkable condition with no visible moth damage which is notoriously common on this type of costume.