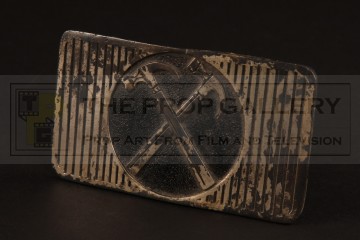 An original prop used in the production of The Wall, the 1982 surrealist musical drama created by the English rock band Pink Floyd and based on thier 1979 studio album of the same name.

Belt buckles such as this can be seen worn by members of the rallies including Pink (Bob Geldof) in the dictator sequence which features the songs In the Flesh? and Waiting for the Worms. The buckle is constructed from painted metal and features the iconic hammer logo to the centre with a hook to the back and evidence of where the loop was one attached.

The belt buckle measures 4" x 2.5" and remains in good vintage condition with some paint loss and lacking the loop to the rear.

A rare and instantly recognisable artefact from this highly regarded cult picture created by one of the greatest bands in the history of music.