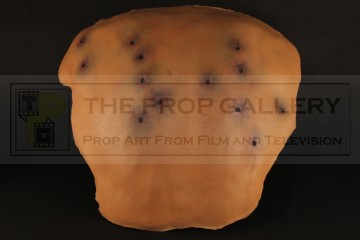 An original prop from the production of Terminator 2: Judgment Day, the 1991 science fiction action blockbuster and the second instalment in the popular Terminator franchise.

This bullet hit back was created by noted effects company Stan Winston Studios for the sequence where Sarah Connor (Linda Hamilton) is seen removing bullets from the back of the T-800 (Arnold Schwarzenegger). The back is cast in solid foam rubber from a mould taken from Schwarzenegger's back and was created for an insert shot of the bullets being removed which was ultimately filmed with a prosthetic appliance worn by the actor, the back features several bullet holes and is airbrush finished to an extraordinarily high standard with bruising around the entry holes and every pore and blood vessel visible.

The prop measures an impressive 22" x 20" and is approximately 4" thick, it remains in near perfect original condition, extremely fine.

A rare and highly displayable artefact from the production of this action blockbuster which saw Stan Winston and Jeff Dawn receive the Academy Award for Best Makeup.