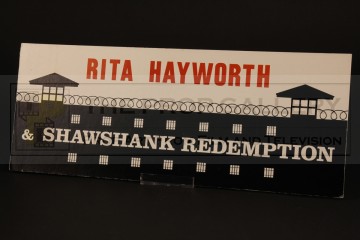 An original parking pass from the production of The Shawshank Redemption, the 1994 prison drama starring Tim Robbins and Morgan Freeman under the direction of Frank Darabont.

Parking passes such as this were issued to crew members for use during the production of the movie, custom printed and mounted on high quality cardboard the pass features a stylised movie logo of the original working title 'Rita Hayworth & Shawshank Redemption' after the Stephen King novella on which the film is based and incorporates a graphic in the form of a silhouetted illustration of the prison wall and guard towers.

A rare and displayable production artefact from this Academy Award nominated and critically acclaimed masterpiece which is frequently regarded among the best pictures of all time.