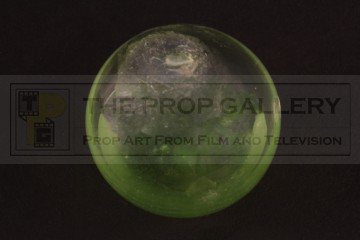 An original prop used in the production of The Rock, the 1996 action picture starring Nicholas Cage and Sean Connery under the direction of Michael Bay.

These VX poison gas pearls feature prominently throughout the move as chemical weapons specialist Dr. Stanley Goodspeed (Nicholas Cage) and former Alcatraz inmate John Mason (Sean Connery) are sent to the island to foil the threat of a team of elite marines led by General Frank Hummel (Ed Harris). The pearl is constructed from blown glass and features a green gel to the interior to simulate the deadly weapon with two holes used to inject it having been covered with silicone.

The prop measures approximately 1.5" in diameter and remains in good production used condition with some of the gel having evaporated in the years since filming took place, overall fine.

A recognisable and highly displayable artefact from this well received box office smash.