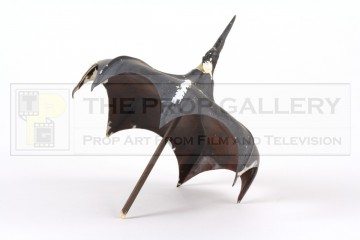 Umbrellas such as this can be seen used by the Vampire citizens of Halloween Town in various scenes of the movie. The puppet scale umbrella is formed from plastic with a wooden handle and features a black paint finish to the exterior and a red finish to the interior. The umbrella measures approximately 4.5" in diameter and remains in good production used condition with some paint loss due to lack of primer used and missing the handle which has unfortunately broken off.