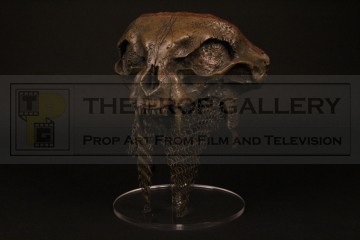 This is an original section of shoulder armour which formed part of the complex battle costume designed by Academy Award winning costume designer James Acheson and worn by Clancy Brown as The Kurgan. This shoulder armour resembles the skull of a sabre toothed animal and is constructed from fibreglass with a weathered paint finish, these shoulder armour sections were created by the production from the same mould as The Kurgan's helmet. The armour features chainmail to the front with the rear having a leather strap to attach around the arm and a buckle to secure the piece to the rest of the costume, foam remnants added for comfort remain to the interior as does a partially removed label with an illegible inscription, holes are present to either side of the armour where further pieces of the costume would attach to this one and to the bottom of the chainmail a small remnant of black elastic is present which again would have secured the armour in place.

The armour measures approximately 11" at its widest point and 13" from top to bottom (including chainmail), it remains in excellent production used condition with some light wear including a small chip to the nose area.

A recognisable and displayable artefact from this highly regarded cult picture.