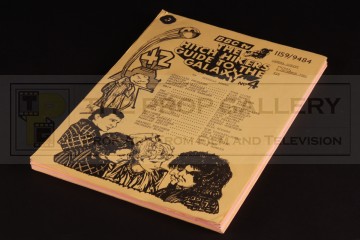 An original script used in the production of The Hitchhiker's Guide to the Galaxy, the 1981 BBC television adaptation of the radio series penned by Douglas Adams.

This production used camera script for episode four of the series comprises of 94 pages in addition to a two page running order cast list and schedule, the front cover, dated Friday 5 December 1980 features the BBCtv and series logos in addition to artwork created by series animator Kevin Davies with production crew credits. The script is printed on yellow and pink pages alternating throughout which distinguish between studio and gallery filming with the final three pages detailing the text of the opening and closing credits.

An incredibly rare production artefact from this highly regarded and memorable BBC series.