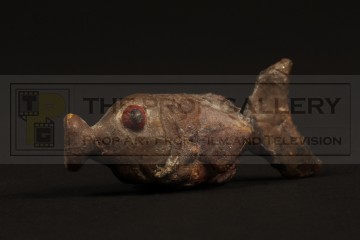 This is an original prop Babel Fish, the memorable series element and 'probably the oddest thing in the universe' which is capable of translating one language to another when inserted in to the ear. Created for the production by freelance prop maker Susan Moore the leech like Babel Fish is constructed from latex and features a pronounced tail fin and mouth piece with some gill detailing. It is believed to have been created by Moore, in more detail than the previous props, for the scene in episode two in which Zaphod Beeblebrox (Mark Wing-Davey) places a Babel Fish in his ear aboard the Heart of Gold.

The Babel Fish measures approximately 1.75" long  and remains in good stable condition having hardened due to age, it represents an incredibly rare and possibly unique survivor of its kind. A displayable and instantly recognisable artefact from this highly regarded and memorable BBC series.