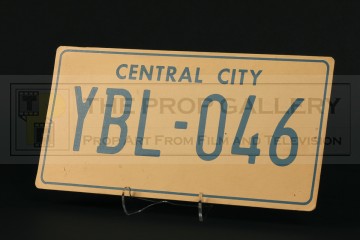 An original licence plate used in the production of The Flash, the 1990 superhero television series based on the DC Comics character starring John Wesley Shipp.

This licence plate was custom made by the production for use on of the vehicles seen in Central City. The licence plate is printed on thick card stock with 'CENTRAL CITY' to the top with the registration number 'YBL-046' below, it is hand inscribed 'JAY'S' to the verso in blue pen.

The licence plate measures approximately 12" x 6" and remains in excellent production used condition with some edge wear and traces of tape residue to the verso where it was attached to a vehicle, overall fine.