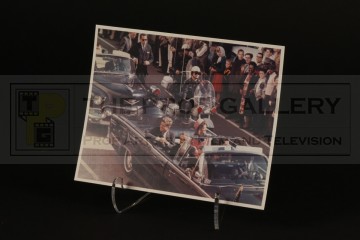 From the 2005 episode Rose starring Christopher Eccleston as The Doctor this prop was created by the production for use in the meeting between Rose Tyler (Billie Piper) and Clive Finch (Mark Benton) as they discuss the origins of The Doctor (Christopher Eccleston). Clive can clearly be seen showing Rose a number of similar photographs showing The Doctor at the assassination of John F. Kennedy in 1963, printed on semi gloss paper the image is a genuine photograph of the motorcade in the moments leading up to the assassination with The Doctor having been digitally added to the crowd although in the version seen in close up on screen The Doctor is standing is a slightly different position.

The photograph measures approximately 6" x 5" and remains in near perfect production made condition, very fine.

A highly displayable artefact referencing The Doctor from this classic science fiction series.