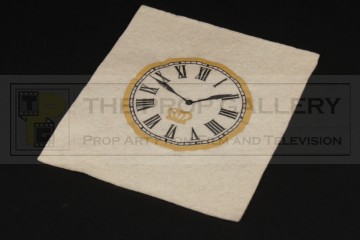 An original patch from the production of Batman, the classic 1960s superhero television series starring Adam West and Burt Ward.

From the Season Two episodes The Clock King's Crazy Crimes and The Clock King Gets Crowned this is an original production made clock patch as seen on the signature costumes worn by Walter Slezak as The Clock King.

The patch is custom printed on felt and features a clock face with a golden crown to the dial, the clock face measures approximately 5" in diameter and is in uncut and unused condition, the full piece of felt measuring 9" x 7.5", in very fine condition exhibiting some minor wear to the hour hand.

A rare and highly displayable artefact from this classic television series.