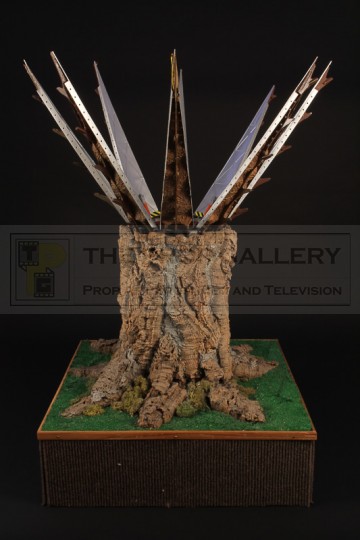 This is the original tree from which Treehawk can be seen launching throughout the series in a nod to Anderson's previous series Thunderbirds. Designed by special effects director Steven Begg the launch tree is built from various materials with the main trunk constructed from 9" diameter pipe which is dressed with sculpted cork to simulate bark. The top of the miniature comprise of 8 sections of plastic which fold down to make way for Treehawk to launch, these features lights to the points (wires cut) with small tubes to the exterior which would have originally accommodated the stems of the foliage which the prop now unfortunately lacks. To the interior is various detailing and further piping which would have been used to rig the Treehawk filming miniature for filming.

The tree stands an impressive 39" high and is presented on a custom base which is dressed with grass matting and moss, this measuring a further 8" in height and 26" square. The prop remains in good screen used condition having had some minor repairs over the years and lacking the original foliage, overall fine.

A unique and highly displayable miniature artefact from this classic Anderson series.