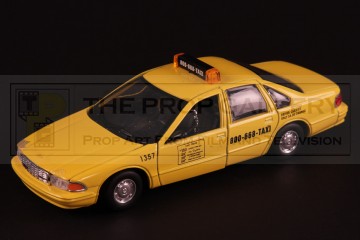 An original miniature used in the production of Team America: World Police, the 2004 action comedy directed by Trey Parker.

Taxi miniatures such as this can be seen used on the Brooklyn Bridge as the limousine takes flight. The miniature yellow Chevrolet taxi is a commercially available die cast toy which has been modified by the production to include the addition of a roof sign and functional lights to the front and rear which are powered via two plates screwed to the bottom of the car, these lights remain operational when the plates are connected to a battery.

A highly displayable artefact from this well received picture.