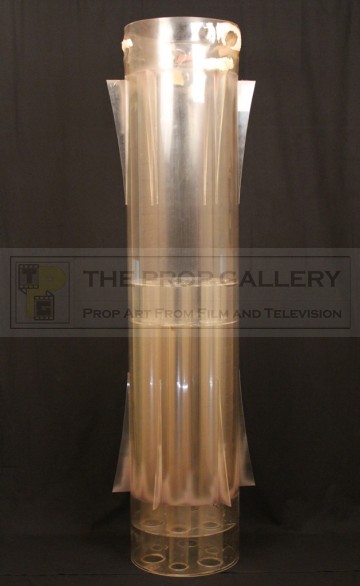 This is the original TARDIS time rotor used in the new series of Doctor Who which began on March 26 2005 making a return to our screens after a 16 year absence. This original column and time rotor of the TARDIS console were used on screen throughout the first series starring Christopher Eccleston as The Doctor.

This prop is the only column and time rotor made for production and is bespoke fabricated from 7mm thick heavy duty acrylic. The column stands 86" tall and has a diameter of 18", the two time rotor sections measure 39" each in height and the tubes are interlocking enabling them to move in and out of each other on screen, this effect would have been created by hanging the section on a heavy duty cable rig connected to a strong motor for power.

This was utilised throughout the first series until it suffered some damage during filming, the production staff went for a break and left on all the TARDIS lights, the sheer quantity and power of the lights generated so much heat that the base of the column that was connected to the console suffered heat damage and began to melt which caused some warping to the acrylic material. For this reason it stands technically upside down in the images for stability. A new console and time rotor was created by the same company for use in the next series and this prop retired.

In addition to aforementioned  heat damage some sections of the rotor tops have been broken and reattached, possibly on production or in transportation at some stage, this does not detract from the displayability of this imposing piece.

Although a large item this stands comfortably in the corner of any room and makes a fantastic display piece and talking point, this represents one of the most important and significant new series artefacts ever to be offered on the collectors market.

Please note that due to large size and weight this item requires specialist handling and crating, we therefore request that any shipping queries, particularly those of an international nature, are discussed before ordering.