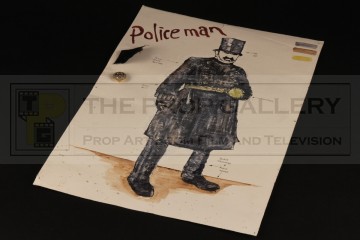 An original costume design used in the production of Sweeney Todd: The Demon Barber of Fleet Street, the 2007 picture starring Johnny Depp under the direction of Tim Burton.

Costume design for the picture was provided by multi Academy Award winner and frequent Tim Burton collaborator Colleen Atwood and this design artwork was created during pre-production as the look of the movie was created. The artwork is rendered in paint on an artists paper and depicts the character of a policeman, the design features various descriptive notes which are hand inscribed in pen in addition to a small fabric swatch and a button sample of the style intended for use on the finished costume. Interestingly the artwork has been painted black to the verso in order to cover a costume design for the character of Anthony Hope which was presumably deemed unsuitable.

The costume design artwork measures approximately 15" x 10" and remains in excellent condition exhibiting pin holes from use during the production, some minor edge wear and a very small tear to the top, overall fine.

A highly displayable production artefact from this critically acclaimed picture which received an Academy Award nomination for Best Costume Design.