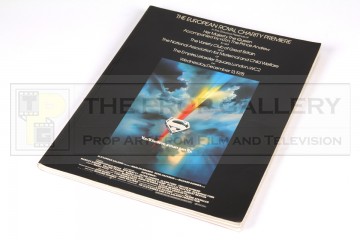 An original programme from the premiere of Superman, the 1978 superhero classic starring Christopher Reeve.

These souvenir programmes were given to attendees at the European royal charity premiere of Superman held at The Empire, Leicester Square, London on Wednesday December 13, 1978. This A4 size soft back book consists of approximately 120 pages consisting of film details such as cast and crew biographies and full credits with a number of paid adverts throughout wishing their best to the production. This was the personal programme of David Speed who was part of the Zoptic effects unit during production, on the credits page a small red sticker has been placed next to his name.

The programme remains in excellent condition throughout with some light corner wear.

A rare and interesting artefact from this highly regarded superhero classic.