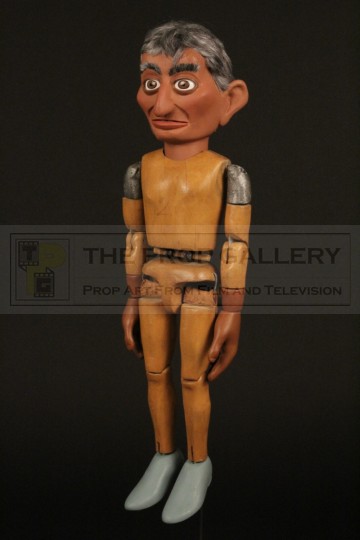 An original puppet body used in the production of Supercar, the 1961 Supermarionation television series produced by Gerry Anderson.

This is an original puppet body created and used in the production of Supercar which saw the term 'Supermarionation', first coined. The body is incredibly intricatly constructed having been hand carved in hardwood in a total of eleven pieces which are joined with hand made metal joints to allow articulation. The body consists of an upper torso which features a hole drilled to the top where the puppet heads could be located and a further hole containing a screw to the back which when tightened would secure the head in place. The arms are constructed in three pieces with a top section of solid lead in order to weight the arms ensuring they hang correctly and two further pieces of wood which are hinged at the elbow by a metal joint, these are connected to the upper torso by metal wire at the shoulder. The legs are of similar construction being hinged with joints at the knee and are attached to the pelvic section by leather straps which hang on wire, this is in turn attached to the torso with a dowel and ring arrangement. The wooden parts are finished with varnish and the body features the number 2 hand inscribed to the chest in pencil.

The body is displayed with a high quality reproduction head of the character Zarin which was created by noted puppet maker Barry Davies. The head is expertly construced from fibreglass with wooden eyes and mohair wig and features a moving lip with internal mechanisms, this locates beutifully in to the neck area of the original body creating a very impressive display piece. The hands and feet are resin reproductions to complete the puppet which is deliberatly left unclothered showing off the intricatly constructed studio used body.

The puppet stands approximatly 18" tall with the original body remaining in excellent production used condition over fifty years later due to its robust construction. A puppet stand is not included however the hole to the rear of the torso can be used to locate the piece on one if desired.

This represents an incredibly rare example of an original artefact used in the production of one of Anderson's earliest Supermarionation productions which remains fondly remembered.