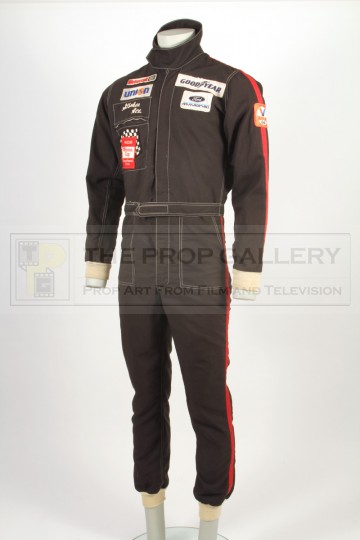 An original costume used in the production of Stroker Ace, the 1983 sporting comedy starring Burt Reynolds under the direction of Hal Needham.

This racing suit was customised by the production for use by Burt Reynolds as Stroker Ace. The Simpson branded full length suit features a number of patches to the front and upper arms to include various brand sponsorship such as Ford and Goodyear with a name patch embroidered with the character name 'STROKER ACE', to the back is a large Chicken Pit sponsorship patch. This suit can be screen matched to the one worn by Reynolds in the climactic scenes of the movie as by this point dirt weathering had been applied to the patches either side of where the racing harness sat, the pocket embroidered with the name and the chequered flag with the Winston Cup patch has been slightly re-positioned, this believed to have been damaged during or following the production leading to the loss of the zip, the original placement can still be seen and this is further evidenced by the blue stitching to the interior while all the other patches are stitched in white.

The suit remains in excellent screen used condition with some damage to the right of the pocket and some small holes to the seat, the Simpson branded patch to the upper left arm was removed following production for unknown reasons, overall fine.

An rare and highly displayable example of principal character wardrobe from this classic Reynolds picture.