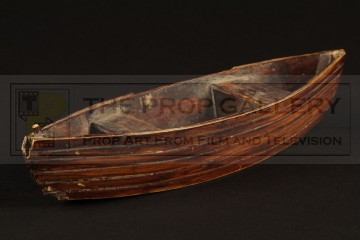 An original miniature used in the production of Stingray, the 1964 Supermarionation series created by Gerry and Sylvia Anderson.

This rowing boat miniature was used on screen in the episode The Lighthouse Dwellers and is first seen as lighthouse keeper Frank Lincoln leaves after switching out the light at the beginning of the episode. It is seen again when Frank heads to Stingray after it has broken its moorings as part of the plan to save Troy and Phones and can clearly be seen tethered to the large scale Stingray filming miniature.

The miniature is intricately constructed from plasticard with each panel individually cut, hand painted and weathered to resemble a wooden finish. To the underside of the boat is residue from the crew having weighted the boat for filming, likely plasticine, and it also features a screw eye to one end which retains the remnants of old string used to pull the boat during filming. To the centre of the boat is a small hole now filled with plasticine which would have been used to fix the figure of lighthouse keeper Frank in place during the production with traces of plasticine still present to the interior.

At least three different miniatures are used on screen as Frank's boat and given the extreme variation between this and the puppet scale miniature it seems unlikely this was constructed specifically to film these scenes as the Century 21 model crew, headed by legendary special effects director Derek Meddings, were not in the habit of making glaring continuity errors. It therefore stands to reason that the miniature was made for or used in other episodes of the series, indeed a similar boat can be seen in the Stingray pen in multiple episodes however it is impossible to verify it as this example. As a side note this miniature has previously been attributed as the rowing boat used in the episode Set Sail for Adventure however this is not the case.

The miniature measures approximately 7.5" long and just over 2" across the middle, it remains in excellent screen used condition with a small piece of material missing to one side revealing white underneath and lacking a stem to one end, overall very fine with only minor paint wear.

An extraordinarily rare and displayable artefact from this early Anderson production.