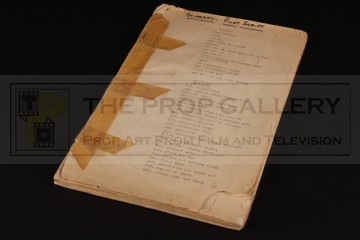 An original script used in the production of Stingray, the 1964 Supermarionation series created by Gerry and Sylvia Anderson.

This is a complete early working script for the series pilot episode comprising of 39 staple bound pages in addition to a further page acting as a cover which details the cast and sets, this being hand inscribed to the top 'STINGRAY - PILOT SCRIPT' in black pen. The front page of the script is headed 'STING RAY' and it contains extremely detailed descriptions of the action taking place in addition to the dialogue spoken, many hand inscribed annotations are present to add changes throughout with one blue amendment page replacing page 20 and other trimmed amendments stapled in place over existing parts of the script. Although the script is undated it is undoubtedly an extremely early working script and contains various dialogue and direction not present in the final episode.

The script measures 13" x 8" and remains in good used condition its 55 year vintage considered, it exhibits edge wear and toning with some paper loss to the corners of the first few pages, supporting tape to the spine having yellowed with age.

An extraordinarily rare example of early production material which clearly saw heavy use during the making of this highly regarded Anderson production.