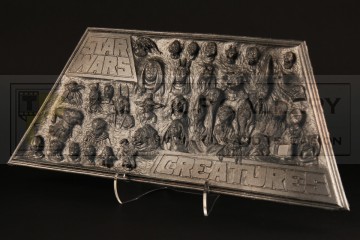 An original crew gift from the production of the 1999 science fiction picture The Phantom Menace, the first instalment of the Star Wars prequel trilogy directed by George Lucas.

These three dimensional plaques were gifted to members of the creature effects crew upon completion of the film, it features a number of creatures from the production in addition to the Star Wars logo in the top left corner. Constructed of resin with a grey painted finish the plaque features a hook to the back to allow hanging, these would have been sculpted by one of the production crew before being cast in resin to be issued as gifts.

The plaque measures over 20" at its widest point and 9" tall, it remains in excellent condition.

A rare and displayable artefact from one of the most influential and highly regarded franchises in cinematic history.