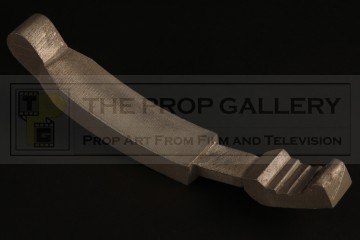 An original R2-D2 utility arm created for the production of the 1977 science fiction picture Star Wars, the first instalment in the classic franchise directed by George Lucas.

R2-D2 is the now iconic astromech droid created by George Lucas and one of the first characters conceptualised by Ralph McQuarrie during the production of Star Wars. A feature of the original first draft script penned by Lucas in 1974 the character has gone on to become one of the most famous robots in motion picture history. R2-D2 was realised on screen by a costume unit worn by actor Kenny Baker and a mechanical version developed by Academy Award winning effects artist John Stears, plagued by problems during the production the R2 unit was simply pulled using wires for a number of shots.

This R2-D2 utility arm is an original created by Petric Engineering who were based at Shepperton Studios and hand built the original batch of R2 props for Star Wars in aluminium. The arm is in a raw unpainted state with the tapered mid section not as finished as its screen used counterparts and appears to have been initially cast to provide the basic shape and then further finished by hand.

A very rare principal character artefact from one of the most influential and highly regarded franchises in cinematic history.