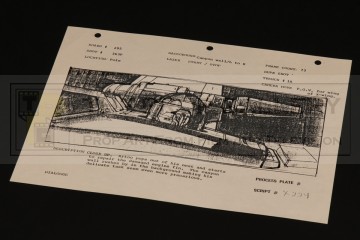 An original storyboard used in the production of the 1977 science fiction picture Star Wars, the first instalment in the classic franchise directed by George Lucas.

This storyboard is a production issued copy of the original drawing by effects illustrator and designer Joe Johnston and depicts R2-D2 making repairs to Luke's X Wing during the climatic Death Star trench sequence at the climax of the movie, utilised at Industrial Light and Magic during the production of the visual effects shots it carries various information relating to camera movements in addition to a description of the scene.

The storyboard measures 8.5" x 11" and remains in excellent condition with three punch holes for binder use, very fine.