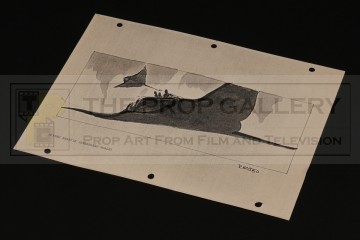 An original concept design used in the production of the 1980 science fiction picture The Empire Strikes Back, the second instalment of the classic Star Wars franchise directed by Irvin Kershner.

This is a production issued copy of the original concept artwork for the flying beasties created by prolific conceptual artist Ralph McQuarrie. This was issued to Brian Johnson, part of the team which went on to win a Special Achievement Academy Award for the visual effects on this picture, and originally formed part of the Empire production bible but was recalled on July 17th 1978 when it should have been removed from the bible and returned to production coordinator Miki Herman, it was instead retained by Johnson and later obtained by The Prop Gallery directly from his personal collection.

A fine production artefact from one of the most influential and highly regarded franchises in cinematic history.