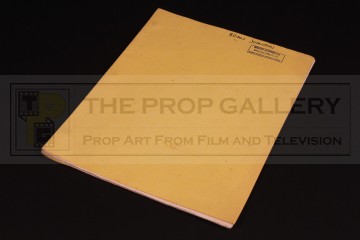 An original script used in the production of the 1980 science fiction picture The Empire Strikes Back, the second instalment of the classic Star Wars franchise directed by Irvin Kershner.

This is an original partial second draft script which was issued to Brian Johnson, part of the team which went on to win a Special Achievement Academy Award for the visual effects on this picture. American writer Leigh Brackett was responsible for the first draft of The Empire Strikes Back which was based on a treatment by Lucas but after her death in March 1978 Lucas took it upon himself to rewrite the script completing his second draft in April 1978. This script contains the first 23 pages of the second draft rewrite and was given to Johnson personally by George Lucas when he visited his and Marcia's home with effects artists and Industrial Light & Magic colleagues Richard Edlund and Dennis Muren in the early stages of the production circa April 1978 to give him a feel for the storyline, it is presumed at this point that the remainder of the script had not yet been completed by Lucas.

This script comprises of 24 pages in addition to a cover page titled 'STAR WARS, EPISODE II, THE EMPIRE STRIKES BACK, BY LEIGH BRACKETT, FROM THE ADVENTURES OF LUKE SKYWALKER BY GEORGE LUCAS' and dated simply 'APRIL 1978', it is bound within front and rear covers of yellow card with the front hand inscribed 'BRIAN JOHNSON' in black pen and bearing his personal stamp in blue ink. The script begins at the start of the movie and covers the establishing scenes on Hoth including those involving Luke on the planets surface up to the point where Han radios in after destroying the probe droid with the final page listing further scenes for which no dialogue is present. There are numerous differences between this script and the finished movie with some of the action in this early draft unfolding is a slightly different order, these differences include, but are not limited to, the following.

The script remains in generally excellent condition throughout with only minor edge and cover wear having been carefully stored by Brian Johnson, it is presented here for the first time directly from his personal collection having remained in his possession since receiving it from George Lucas in 1978, very fine. This represents an incredibly rare example of a script which was issued in only very limited numbers to senior production members.

An incredibly rare production artefact from one of the most influential and highly regarded franchises in cinematic history.