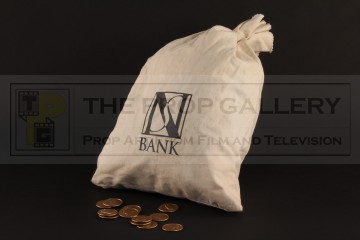 An original prop used in the production of Spider-Man 2, the 2004 superhero sequel starring Tobey Maguire and Kirsten Dunst.

These prop bags can be clearly seen used in the sequence where Doc Ock (Alfred Molina) attempts to rob the bank only to be foiled by Spider-Man (Tobey Maguire). The bag is constructed from material with a tie to the top and features the bank logo to one side, it is accompanied by twelve faux gold coins which are constructed from plastic and feature various American presidents, each one being a different president. A lesser number of these bags were subsequently reused in Spider-Man 3 in the sequence where Sandman (Thomas Haden Church) hijacks the armoured truck.

The bank bag measures approximately 20" x 12" when laid flat with the coins each measuring 1.3" in diameter, both exhibit some wear consistent with production use with the bag featuring some small holes, generally fine.

A displayable artefact from this well received superhero franchise.