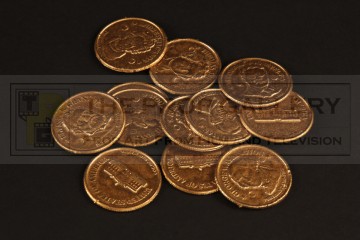 A collection of original coins used in the production of Spider-Man 2, the 2004 superhero sequel starring Tobey Maguire and Kirsten Dunst.

These prop coins can be clearly seen used in the sequence where Doc Ock (Alfred Molina) attempts to rob the bank only to be foiled by Spider-Man (Tobey Maguire). The twelve faux gold coins are constructed from plastic and feature the White House to one side with a differing American president to the other, they each measure 1.3" in diameter and remain in good production used condition.

An affordable collection from this well received superhero franchise.