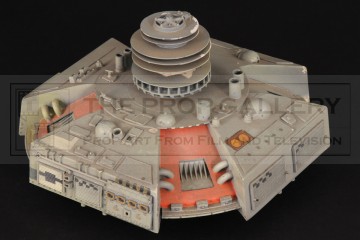 An original miniature used in the production of Space: 1999 the cult science fiction television series produced by Gerry and Sylvia Anderson.

This model miniature section formed part of the Daria spaceship from the Year One episode Mission of the Darians. The Daria was designed by special effects director Brian Johnson and model maker Martin Bower and at approximately 15 feet was the largest miniature built for the series. Following its use in this episode the prop was cannibalised to make the Delta space station miniature for the Gerry Anderson produced television special Into Infinity also known as The Day After Tomorrow in the United States, this production utilising a large amount of the cast, crew and sets from Space: 1999.

This model section is clearly visible to the very top of the Daria spaceship in Mission of the Darians and to the very bottom of the Delta in Into Infinity. Built by series model maker Martin Bower the miniature is constructed from plastic and is heavily detailed with numerous kit parts and EMA plastic pieces, this finished in grey paint with the red sections being added for Into Infinity.

A highly displayable miniature artefact from this classic Anderson series which remains highly regarded for its visual effects.