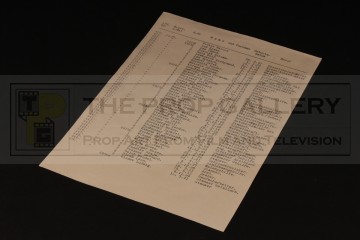 An original prop used in the production of Schindler's List, the 1993 historical epic directed by Steven Spielberg based on the real life events of the Holocaust.

Lists of the Schindlerjuden in the care of Oskar Schindler (Liam Neeson) can be seen used by him and accountant Itzhak Stern (Ben Kingsley) in various scenes of the movie. This original production used list is printed on grey paper and features the names of the Schindlerjuden in addition to other information such as registration number, date of birth and job title. Additionally the top name 'WULKAN MARCUS' to the top and the code '693' to the bottom are type written rather than printed. A rare example of the central plot device from this highly regarded modern masterpiece which was the recipient of the Academy Award for Best Picture and saw Steven Spielberg win his first Academy Award for Best Director.

This represents an extremely significant artefact from this critically acclaimed masterpiece which is frequently considered one of the greatest pictures in the history of cinema.