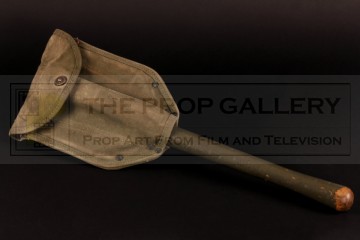 An original tool used in the production of Saving Private Ryan, the 1998 war epic starring Tom Hanks under the direction of Steven Spielberg.

This entrenching tool is one of a number used during the production and consists of a fold up shovel of metal construction with a painted wooden handle. This is presented in a genuine military canvas carrying pouch of the period which features hooks to enable it to be attached to webbing. The interior of the pouch flap is had inscribed 'WADE' in black pen for Medic Wade portrayed by Giovanni Ribisi.

The tool measures approximately 21" long when folded in the pouch and remains in good condition with some paint loss and mud residue.