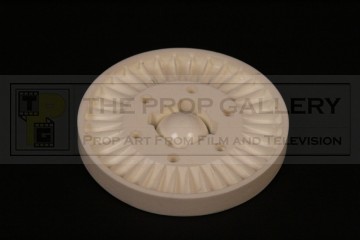 An original prop created during the production of Moon, the acclaimed 2009 science fiction drama directed by Duncan Jones and starring Sam Rockwell.

This is an original piece created by the production for use on Sam Bell's (Sam Rockwell) spacesuit backpack which was made by an effects team headed up by Bill Pearson at Shepperton Studios. Constructed from solid resin it was ultimately surplus to requirements and remained unused, it measures approximately 3.75" and remains in good production made condition with some light scratching to the verso.

An affordable artefact from this already cult science fiction masterpiece.