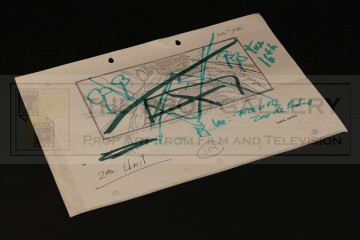 Indiana Jones and the Raiders of the Lost Ark

An original storyboard used in the production of Indiana Jones and the Raiders of the Lost Ark, the first instalment in the popular Indy franchise.

The storyboard depicts a scene from the memorable chase sequence and has been crossed in green highlighter, common on production after shots have been completed. The storyboard is inscribed '1st UNIT' in pen which has been crossed out and replaced with '2nd UNIT', further to this the board has a number of trees hand drawn in green pen and the windscreen of the vehicle with the date Tues 16th and some other annotations relating to the location. From the collection of second unit assistant director Carlos Gil.

The storyboard is A4 in size and remains in excellent production used condition with minor edge wear and fold crease, overall fine.

A fine example of a storyboard which clearly saw heavy use during the production of this highly regarded picture.