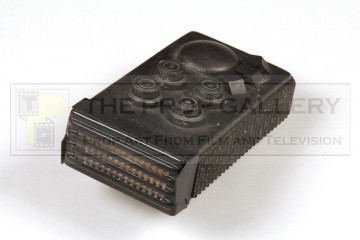 Robot remote control - The Greatest Show in the Galaxy

From the 1988 serial The Greatest Show in the Galaxy starring Sylvester McCoy as The Doctor is this original robot remote control, a remote similar to this can be seen used by Ace (Sophie Aldred) and Bellboy (Christopher Guard). The prop is one of three constructed for the serial by BBC Visual Effects Department assistant Mike Tucker and comprises of a plastic shell which houses a small torch to the interior and features various detailing of resin and rubber with one of the buttons being functional to operate the torch concealed within.

The prop measures approximately 5" x 3" and remains in excellent production used condition with some minor wear from use and storage, overall fine. The light up function is no longer operational due to expired batteries in the interior torch which are not easily accessible.

This represents a rare example of an original hand prop and a very displayable artefact from this classic science fiction series.