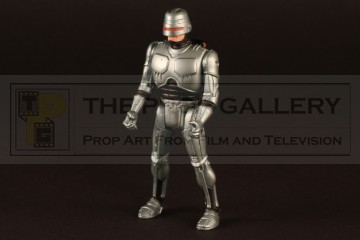 An original figure used in the production of RoboCop 2, the 1990 action sequel directed by Irvin Kershner.

This action figure was used behind the scenes during the production for reference on camera placement and positioning likely for miniature and stop motion effects sequences. The figure is actually a commercially available Kenner action figure released after the first movie which was acquired for use by a production member. The figure features a cap firing mechanism to the rear and a detachable helmet with the inner leg stamped with the copyright 'ORION 1988'.

A highly displayable artefact from the production of this classic action franchise.