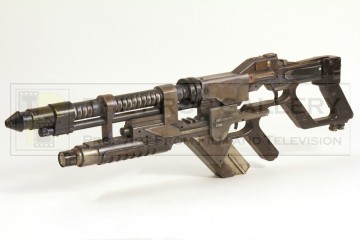 An original prop used in the production of Alien Resurrection, the 1997 science fiction picture directed by Jean-Pierre Jeunet.

This multi function weapon can be seen used by Ripley (Sigourney Weaver) as she destroys the clones using the flamethrower mode. This prop is a hero incinerator version used for this purpose, constructed from resin with machined aluminium parts and weathered finish the weapon features a gas pipe to the interior used to create the practical flame effect with a functional tactical light and counter, the nozzle to the underside of the barrel was changed to the non practical version following filming. This weapon has several distinguishing features allowing it to be screen matched to the one used by Weaver before it is discarded by her.

The prop weapon measures an impressive 40" long and remains in excellent screen used condition with some minor wear and a repaired break to the receiver likely as a result of Weaver throwing it to the ground during filming, otherwise fine.