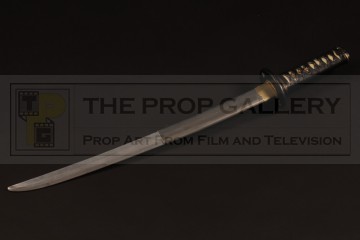 An original prop used in the production of The Last Samurai, the 2003 drama starring Tom Cruise and Ken Watanabe.

This is a retractable special effects version of the wakizashi, the smaller companion sword to the main weapon of the samurai seen used by various characters throughout the movie including by Nathan Algren (Tom Cruise) during the assault on Katsumoto's (Ken Watanabe) village. Fabricated for the production by noted effects house Weta Workshop the weapon is constructed from metal with a decorative leather wrapped grip, the two part blade which retracts in to itself designed to create the effect of stabbing on screen in a both safe realistic manner.

The weapon measures approximately 23.5" long when fully extended with the blade measuring 17.5" it remains in excellent condition exhibiting some minor wear to the blade and guard consistent with use during the production, overall fine.